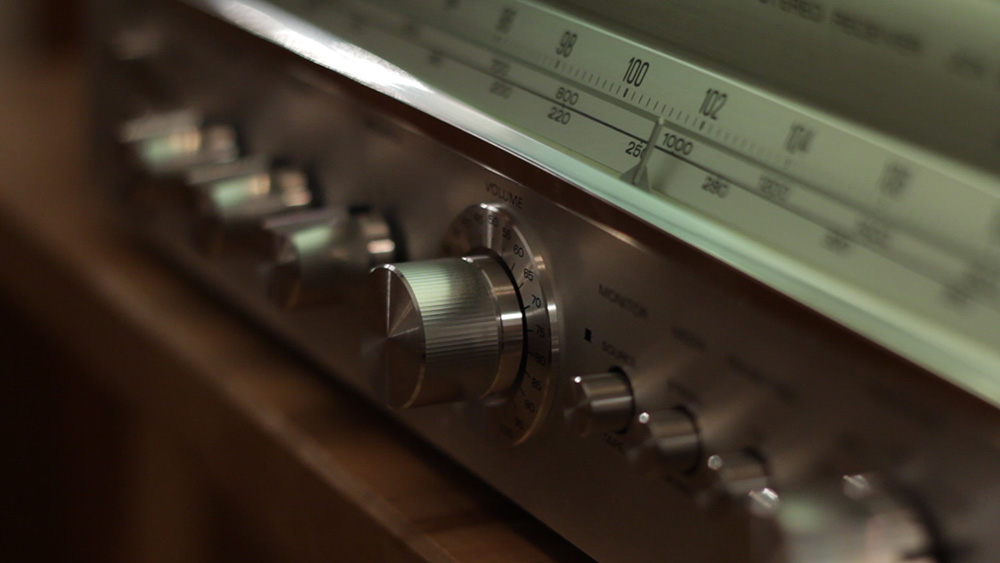 Now I don’t blog too often, but last time I did I was moaning about how my time machine had not worked and how great it would be if we could go back to the 70s/80s when things were a bit more exciting. “Why were they more exciting” you may ask? “are you mad?”

….Well,  possibly, but I mean in terms of technology…. things were made a bit better and technology was becoming accessible. New tech wasn’t so much of a “throw away” item as it is today, knocked up in a factory with the cheapest components possible and cheap, lightweight casings. Yes I know we all want things to be cheaper, lighter, faster, and generally more accessible but wasn’t it great when there was no internet and you used to desire that “thing” you’d seen in the shop window. Then after harassing your mum for as long as possible for the money to buy it (and failing), trying to work out ways to earn and save up. Yes… save up, until you could buy it! (disclaimer:Reel 9 does not in any way endorse the act of “saving”. Money is available instantly from multiple outlets such as “getyerloannow“, “telluswhenitspayday” etc. etc).

If you were a youth in the late 70s or 80s then there really were only a few options. Paper rounds were a firm favourite, but it sure took a lot of cold mornings and nights with frozen fingers to get that “thing”, but didn’t we appreciate it when we did? I think this is an older generation thing passed down, as I remember going round to mate’s houses (and my own) of course where dads were extremely proud and protective over their latest purchase…..“don’t touch it!” would be the cry from said “mate” as we admired in awe the new Sanyo/Sharp/Bush hi-fi his old man had just bought. I mean these were great things. Silver…..brushed aluminium……wood…heavy knobs that turned…lights n stuff. These were things of beauty and woe betide you if you damaged another man’s Sharp. 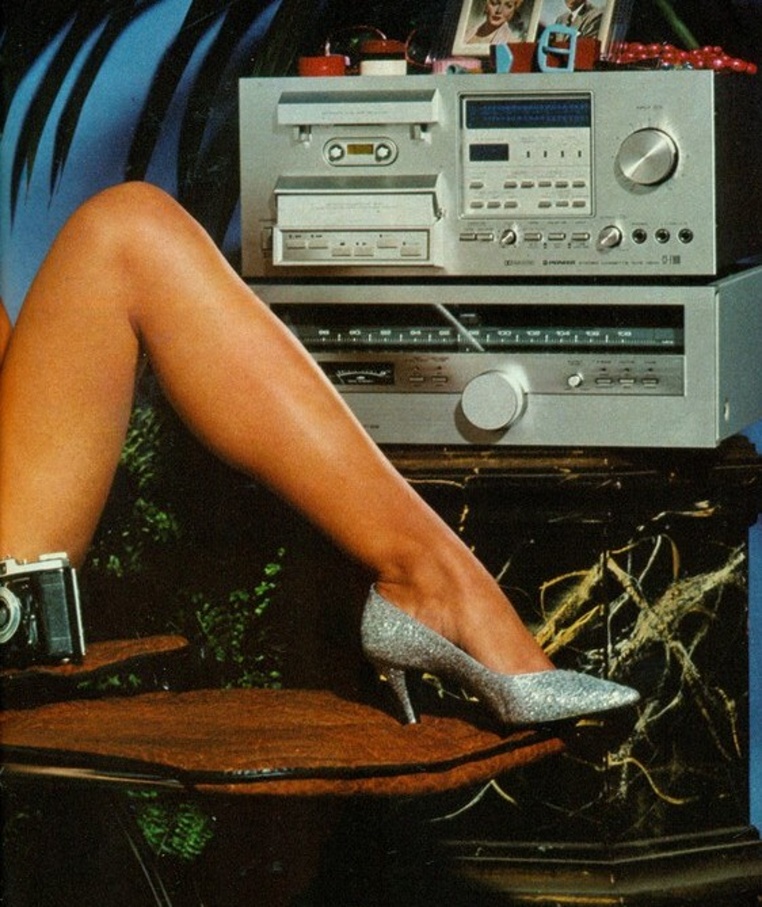 But, alas, these things are no more and we are resigned to settling for the latest plastic item purchasing that the marketing masters have convinced us that we need to make our lives better. A few of us though have started a revolution. We go to car boot sales and charity shops hoping to seek out those old gems of technology that remind us of our youth….but it’s becoming harder…”everybody’s at it these days”. And they are.

What about when you used to get the “Loot” free ads paper and scour it before anyone else found that old Roland synth placed in the wrong section – “I’m avin that!” get round there and pick up a bargain. No chance anymore…we’ve got Ebay. Any old boys around that want to get rid of all their classic old stuff for peanuts?, no way, they’ve all been on Ebay pricing it up. If that’s not enough then you’ve got the car boot vultures…now these blokes are scary. Up at 4am standing in a field waiting for a car to arrive. Before you know it their face is stuck to the drivers window crying out in desperation “ow much for that Adidas bag in the boot mate?” The car hasn’t even stopped. I mean these guys are all over everything….records, old tech, hi fi, cameras, lenses, you name it.

Then there’s the charity shops, they’re even pricing up from Ebay! “ooh look its a Yashica 70-200mm, stick £50 on it Marg..” Now don’t get me wrong, I want the shop to make money, but isn’t the whole point of going in that of trying to find a “bargain”? I mean I went into a charity shop last week and saw an old suit I quite liked the look of. It was wool and seemed quite nice in old suit kind of way. The price tag read £99.99. Ninety Nine Ninety Nine!!! for an old suit? 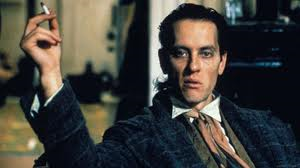 So to drag you back to where I should have started without all of this rattling on I had basically given up hope of ever making a “special find” in time warp condition ever again, but then yesterday something happened.

The Mrs and I were out doing our usual “wander around small average town in the middle of nowhere looking at things for something to do” (we’ve all been there?….haven’t we?….maybe it’s just us) when a man called us into his lock up (don’t worry, it’s strictly legit). He had some stuff, loads of stuff. Usual old tat you’d find from any secondhand seller, but also some real vintage, interesting stuff, old radios, retro 70’s stuff and also some boxes with “new” stuff in, except it wasn’t new, it was new old stock. Now if you’re not familiar with the term NOS then it is usually things that were stocked in a shop for years but never sold. After some mooching and thinking plus some hard-nosed haggling I eventually came away with this…it’s new never been out of its box, made in 1978 of silver and wood and not been touched for 35 years! The Sanyo JCX 2150 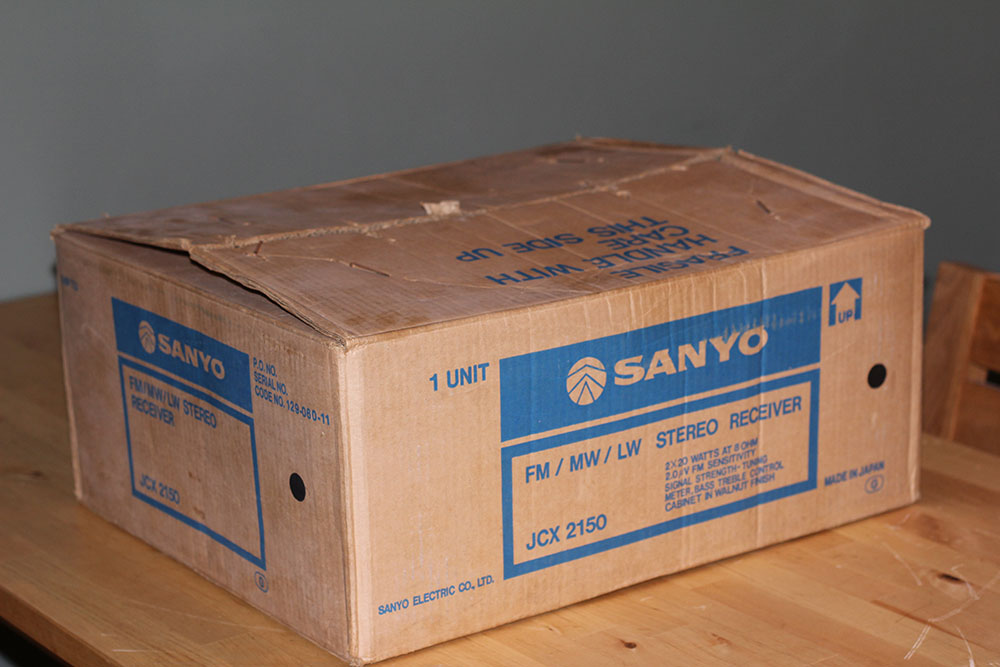 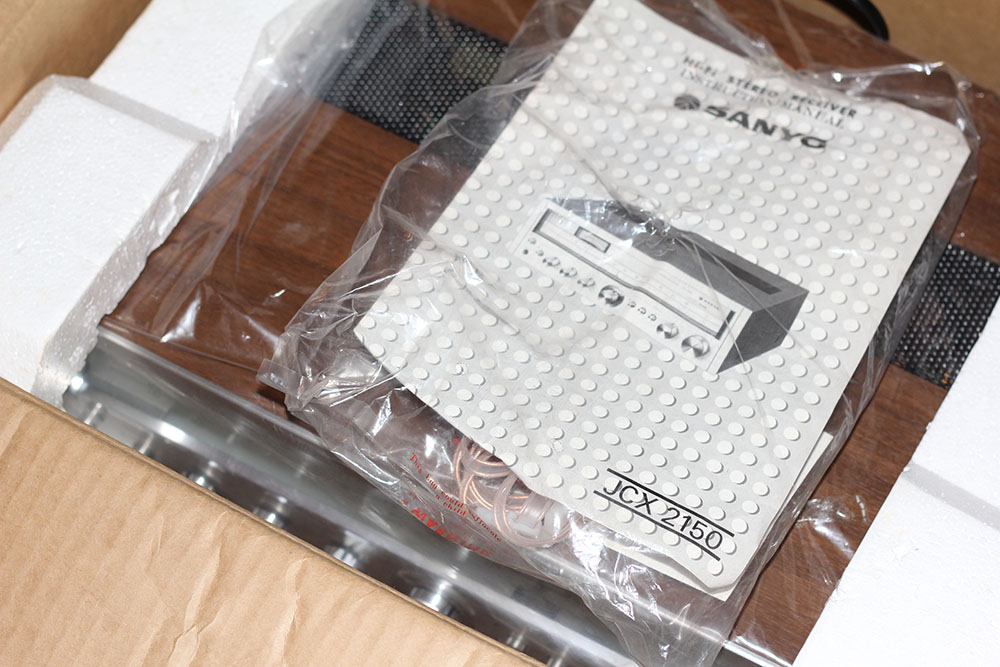 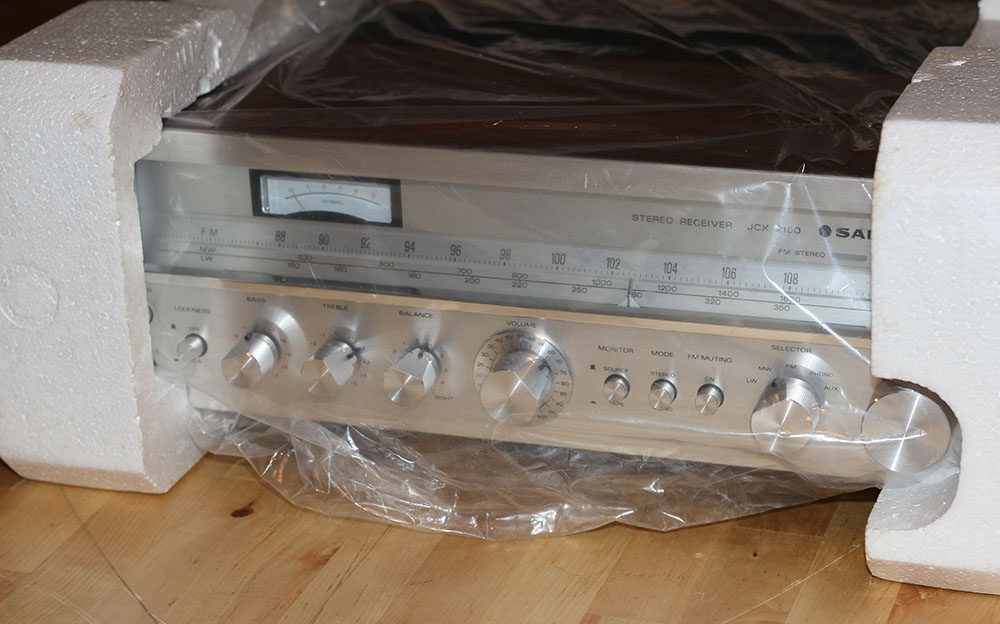 The time machine had worked! I had gone back. It was cheap, it was a bargain, I was back in 1978. I got it home and decided to document its grand opening, the birth of the mighty Sanyo JCX 2150 that had been frozen in time for over 35 years, this could not be overlooked. Would it work? it could have been stored damp and the caps gone, only one way to find out…

It powered up with a lovely greeney-white glow across the huge display window. I hooked up a CD player, stuck the aerial to the wall and hooked up some JBL Control 1s to test it. Now unlike your normal Hi-Fi where the volume control only goes up to 10, this one goes up to 100!, I knew that it was gonna be loud.

Anyway it wasn’t as loud as I initially thought it might be but hey it is only 20W per channel. It sounded pretty good, so I carried on checking out the radio (rubbish reception up in them there hills I’m afraid) but it all seemed to work and generally sounded ok. I don’t think it will win any sound quality awards, but look at it….it is surely a thing of beauty in its own way.

For a moment, taking this thing out of its box and carefully plugging it in, turning the dial to tune in the receiver, the weighted controls…I was transported back to the days of my dad’s old Sharp in the corner, listening to West Ham on the radio on a cold winter night in the European Cup Winners Cup. Never really got that dad…”cup winner’s cup?…what do you mean?”.

What I’m going to do with him I’m not sure. It seemed a crime to awake him from his sleep, so I put him back in his bag…then his box….and then put him back to bed….for now.